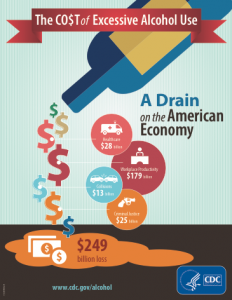 The adverse effects of alcohol consumption remain an imposing medical and socio-economic concern for our society. Underscoring the seriousness of the problem are the facts that in the United States alcohol use disorders rank among the top three psychiatric conditions, are responsible for at least 105,000 deaths annually, and cost our society over $249 billion annually. Despite these staggering statistics, many questions remain unanswered regarding the basic neurobiological mechanisms responsible for alcohol use disorders. A detailed understanding of the mechanism of action of alcohol on the brain would allow for the development of safe, effective treatments to combat alcoholism.

Alcoholism is a genetic disease that is known to “run in families”. Transmission of DNA variants from parent to offspring (i.e., Mendelian inheritance) has been the generally accepted explanation for the familial nature of alcoholism. However, despite decades of intense effort, only a few DNA variants have been identified and they only explain a small fraction of alcoholism heritability. The search for the “missing heritability” has reinvigorated interest in the once discounted theory that traits acquired during an individual’s lifetime can be transmitted across generations. Experiments are underway that challenge the dogmatic Mendelian view of inheritance by focusing on investigations of transgenerational epigenetic inheritance (a.k.a., soft inheritance). We are currently testing the provocative hypothesis that alcohol exposure produces enduring epigenetic effects that can be passed through the germline, influence the epigenetic program of descendants, and ultimately impact alcohol drinking and behavioral responses to alcohol. We recently demonstrated that paternal preconception alcohol exposure impacts behavioral sensitivity to alcohol, alcohol drinking behavior, and response to stress in male offspring.

Ethanol-induced changes in the brain transcriptome are thought to underlie the development and persistence of AUD. A detailed understanding of how ethanol alters the transcriptome could reveal therapeutic targets for combating AUD. Emerging evidence indicates that non-coding RNAs (ncRNAs) function as central epigenetic regulators of gene expression networks. It has recently been discovered that many ncRNAs, including lncRNAs, are altered in brain of alcoholics and animal models. lncRNAs are transcripts longer than 200 nucleotides that lack an open reading frame. We hypothesize that individual lncRNAs are key regulators of ethanol drinking. To test this hypothesis, genetically engineered animals with altered expression of lncRNAs are being created and analyzed. Mutant animals are initially screened for alterations in ethanol drinking. Animals with drinking phenotypes will be subsequently scrutinized for mechanistic insights, including molecular, transcriptomic, cellular, and additional behavioral
investigations.

Novel, noninvasive, facile methods for investigating ncRNA function in brain are desperately needed. We propose the use of exosomes as vectors for genetic perturbation of ncRNA function in brain to alter ethanol drinking. Exosomes are nanometer-sized, liposome-like vesicles that are secreted by all cells. These endogenous vesicles shuttle RNA and proteins throughout the body. Recent pioneering studies have demonstrated that intranasal delivery of exosomes loaded with RNA (or drugs) effectively delivers functional agents selectively to brain. In addition to the use of exosomes to perturb ncRNA function, we are also exploring antiinflammatory drug delivery selectively to brain via intranasal exosome treatment to reduce ethanol drinking.